Mortgage Rates Up Due to Inflation

4 Reasons Canadian Mortgage Rates Are Going to go up Soon

Here is a great summary of what is causing mortgage rates to be nosing up in the near future. They really should have gone up by now but the anticipated “Spring housing market rush” competition with the banks is holding them down.

The latest round of economic data has real-estate watchers returning their focus to interest rates.

The graph we watch to show us this is here: 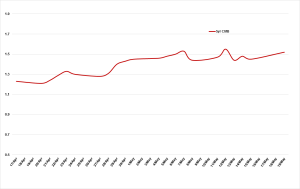 Graph shows why mortgage rates may go up soon

We watch all kinds of indicators for when mortgage rates may change.

This is the main one, the CMB – Canadian Mortgage Bond. As you can see it is on the way up and mortgage rates and the graph are directly related.

Rate Watch Program
When rates go up the banks call us and give us at least 2 hours – and sometimes 2 days – notice. This lets us send in all the files that we are working on for 120 day – or 4 month – rate holds. All the files that have enough data in them – at least an application and the disclosures and a payslip – get rate holds at today’s rates.

The banks do not do this for you! Another reason to use a broker that works the system to your advantage at no cost to you!

Mortgage interest rates are poised to increase as soon as this summer.

If the banks aren’t prepared to put the brakes on rising mortgage debt, the Bank of Canada may soon be, hinting that it could raise its key overnight rate as soon as this summer.

“The heightened uncertainty around the global economic outlook has decreased in the weeks since the Bank released its January Monetary Policy Report (MPR),” reads Thursday’s announcement maintaining the Central Bank’s benchmark rate at 1 per cent. “With tentative signs of stabilization in European bank funding and sovereign debt markets, conditions in global financial markets have improved and risk aversion has decreased.”

For analysts, that translates into the strongest indication in more than a year that the bank may have enough room sometime this year to raise the interest rate it charges banks. The knock-on effect would be to raise interest rates for borrowers.

Ensure you get a rate hold before this happens.