1 Graph Shows Why Mortgage Rates Are Lower in Jan 2015

The graph below shows why rates have found what we think is a short term low. This will not last forever so be sdure to get a rate hold now! 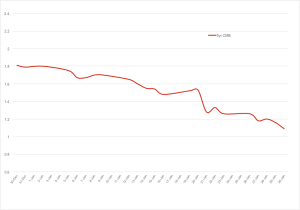 The banks get their money for mortgages from the CMB … this is a short term oddity right now. This trend will change soon and is from:

The Bank of Canada has certainly shaken things up with its surprise 0.25 bps rate cut. Even more so because Governor Stephen Poloz has left the door open for a further cut.

Poloz explained that the BoC trimmed its rate as “insurance” for the broader economy in light of the fallout from falling oil prices. He went on to say the Bank was prepared to take out more insurance.

However, it is not a sure bet that the lower central bank rate will inflate the Canadian real estate bubble. Canadians have established a history of using lower rates to pay down debt, rather than adding to it.

All this from Calgary’s top mortgage broker, Mark Herman

Tricky changes to the mortge rules

Here is one of the changes of the mortgage rules that is now in effect – called the B21 Rules.

How the banks are now calculating monthly payments for secured lines of credit:

For the calculation of your QUALFYING INCOME – as in, the way the government says your mortgage math is done – your total balance on your LOC is now treated:

This number is now used as your payment, not what the payment actually is.

This is more support for central/ down town  condos in Calgary supporting their prices as more people move to the core to avoid the commute.

Homeowners choosing urban living over suburbia is a key trend in Canada’s real estate market and is helping drive both retail and commercial development in city cores, according to a report. …

“Younger workers in particular — though not exclusively — continue to flock to the urban core, preferring to work where they live, rather than take on long commutes,” the report says.

Members of the millennial generation are not the only ones giving up the more generous living space of suburbia for downtown living. Baby boomers with empty nests and the generation following the millennials, which the report calls “Generation Z,” are also joining the trend …

The Bank of Canada has updated when they plan to increase rates again … about a year from now – so next October? Expect rates to go up 1% then.

The central bank further pushed back the time frame for when it reckoned the economy would reach full capacity, to the second half of 2016 from the mid-2016 estimate in July. It also delayed by one quarter to the fourth quarter of 2016 the time when it expects total and core inflation to settle at its 2 percent target.

Here is the link: http://ca.reuters.com/article/businessNews/idCAKCN0IB1NY20141022

Not only does TD have collateral mortgage registrations but they, and all the other banks love to gouge on the payout penalties.

Below in blue I have highlighted the most important part of this and paste it here too: “the Calgary numbers we’re seeing today show this is the strongest and healthiest housing market since the 2006 boom,” he said. “That said, this isn’t the boom — and that’s a good thing.”

As always, sustained growth  – as high as China if Alberta were a country – has people moving here and they have to live somewhere. Check out my other blog posts for more on this topic. Mark Herman

Single-family homes average more than half a million dollars

CALGARY – Calgary’s booming housing market is pushing average prices to record levels as single-family home sales so far this year are averaging well above half a million dollars.

“It usually slows down for Christmas season but we are realizing that it remains at a steady rise. We are still finding a shortage of listings, lots of activity with shorter days on the market. We are finding from fixer uppers, inner-city properties to turnkey luxury high-end homes in demand. We anticipate the steady market to continue to heat up for the new year.”

On Friday the Canadian Real Estate Association released its latest MLS data for October showing that Calgary had the best year-over-year gain in the country in the MLS Home Price Index.

CREA said prices in Calgary, for homes tracked by the index, rose by 8.17 per cent from last year while the national average of 11 markets surveyed was up by 3.52 per cent.

Scott Bollinger, broker with the ComFree Commonsense Network, said there was a little softness in the market last year because of the introduction of tighter mortgage rules.

“But the Calgary numbers we’re seeing today show this is the strongest and healthiest housing market since the 2006 boom,” he said. “That said, this isn’t the boom — and that’s a good thing. 2006 was marked by some things we’re not seeing today — a massive inventory crunch, irrational exuberance and confidence that the market would stay strong indefinitely, and almost unthinkable economic growth. We saw six and seven per cent growth in 2006.

“Our economy today is growing at a nice, measured, healthy rate — three, three-and-a-half per cent. So we’re still seeing confidence, but it’s not the same extreme. There’s a collective memory in this city of the boom, so I think this strength we’re seeing is more sustainable. Houses are still selling quicker, but they’re nowhere near the frenzied pace we saw in 2006, when the average time on market dipped to 20 days.”

Calgary’s real estate market is showing no signs of slowing down in November. Month-to-date including Thursday, there have been 830 MLS sales in the city, up 34.30 per cent from the same period a year ago, according to CREB. The average sale price has also climbed by 7.47 per cent to $463,126.

Doug Porter, chief economist with BMO Capital Markets, said there are two notable splits developing in Canada’ housing market – larger cities are hot, while smaller cities are generally not, and sales in the West are strong, but are weakening in much of the East.

“When judged by total sales volumes, a measure that combines both price changes and the number of units sold, the hottest markets this year are Calgary, Edmonton, and, against all expectations, Vancouver,” he said. “All three have reported double-digit volume increases, the only cities in that category.”